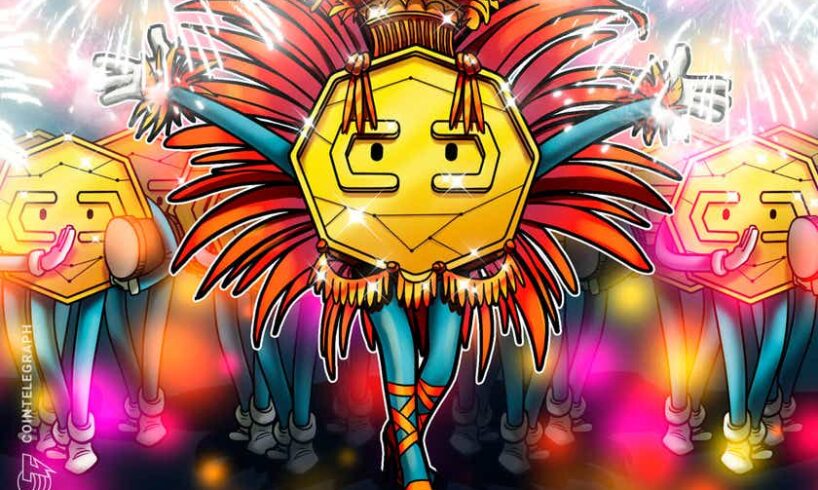 In 2021, the Brazilian cryptocurrency market gained more investors, reached the Brazilian stock exchange and “punctured the bubble” of the mainstream, becoming an important part of the investment portfolio of ordinary Brazilians.

In addition to strengthening the crypto community in Brazil, the initiatives of Brazilian blockchain companies have taken cryptocurrencies to the most varied segments of society, from football — a great national passion — to civil aviation. Cointelegraph Brasil chose the 10 most prominent figures in the country in 2021, taking into account the performance of the companies represented, their impact on the crypto community and their pioneering spirit in the market.

The above are just 10 important individuals in a massive ecosystem that spans around the globe. To see more luminaries who are lighting up the cryptocurrency and blockchain industries, check out the Cointelegraph Top 100 for 2022.

Luis Adaime is CEO and founder of MOSS, a Brazilian company dedicated to the tokenization of carbon credits through the MCO2 token. Founded in 2020, MOSS formed a series of partnerships in Brazil: Its logo appeared on the Clube de Regatas Flamengo shirt during the 2021 season of Brazilian football. Other relevant carbon offset partnerships involved large companies such as iFood, Hering and GOL Linhas Aéreas. MOSS also launched nonfungible tokens (NFTs) aimed at preserving the Amazon forest. The collection linked to MCO2 is aimed at sustainability projects in Brazil.

A graduate of Harvard Law School, computer scientist, professor and information security specialist, Edílson Osório was a blockchain and Big Data consultant at ITS-Rio and is a member of the European Observatory for Blockchain. He is the CEO and founder of OriginalMy, a legaltech firm with a blockchain-based platform to increase trust in governance by authenticating identities, signatures, authorizations and content.

Thiago César is CEO of Transfero Swiss, the issuer of the largest stablecoin backed by the Brazilian real, the BRZ. In 2021 alone, the stablecoin recorded a trading volume of $1.5 billion, the highest since the coin’s launch in 2019. BRZ reached major global exchanges and stood out for its multichain technology featuring compatibility with Ethereum, Solana, Stellar and other networks. Transfero Swiss is also expected to launch cryptocurrency solutions for retail in the country with a BRZ trading platform against a variety of cryptocurrencies.

Fernando Carvalho is CEO of QR Capital, controlling holding of the manager QR Asset, one of the pioneers in crypto-asset investment funds in Brazil. QR Capital launched the country’s first DeFi-linked exchange-traded fund on the Brazilian stock exchange, consisting of nine cryptocurrencies on Bloomberg’s Galaxy DeFi Index. Previously, QR Capital had already launched ETFs with exposure to Bitcoin (BTC) and Ether (ETH), ranking among the highest-profit investments during 2021 on the Brazilian stock exchange B3.

Brazilian businessman and popular YouTuber Thiago Nigro — known by the pseudonym “Primo Rico” — has become a noted cryptocurrency proponent, with educational videos on his YouTube channel and 5.5 million subscribers. His proximity to the crypto market was also in the news in 2021 when he revealed that he was a partner at Brazilian exchange Biscoint through Rico Investimentos. Another initiative by Nigro launched in 2021, digital bank Rico, offers exposure to cryptocurrencies through two investment funds.

With worldwide experience in the Brazilian financial and real estate markets, Fernando Ulrich is a student of monetary theory and a digital currencies enthusiast. Ulrich has worked for several globally known companies such as Thyssenkrupp and XP Investimentos, having held the position of chief analyst at the cryptocurrency exchange XDEX. He is currently at Liberta Investimentos, which is an investment advisory firm associated with XP. Ulrich was the first prominent Brazilian economist to publicly validate Bitcoin and frequently speaks publicly about Bitcoin and various cryptocurrencies on his YouTube channel and on Twitter.

President of the Central Bank of Brazil, Roberto Campos Neto, launched an agenda of digital innovation with his management of Pix, the financial authority’s quick transaction system that quickly gained popularity among the Brazilian population. Campos Neto also leads the country’s central bank digital currency project, the Real Digital, which is still in the analysis phase, but could start its first trials as early as 2023.

Daniel Coquieri, the founder of the Brazilian exchange BitcoinTrade, founded Liqi in 2021, an asset tokenization company that quickly gained prominence in the Brazilian market.

Liqi, which was created after the sale of Bitcoin Trade to Ripio, later became a partner of football club Cruzeiro and has already earned more than $200,000 for holders of the Cruzeiro token (CRZ). This is linked to FIFA’s solidarity mechanism that rewards clubs that train athletes in cases of international transactions. Liqi has also launched other crypto products on the market with good acceptance among investors.

Reinaldo Rebelo is the CEO of the largest cryptocurrency exchange in Brazil, Mercado Bitcoin, valued today at $2.1 billion. Over the past few years, the exchange has expanded the exposure of the Brazilian financial market to cryptocurrencies, widened operations and reached the mainstream. The exchange has run advertising campaigns on large vehicles, sponsored football teams and launched fan tokens of Brazilian football giants on its platform, in addition to innovating with judiciary bond tokens and other crypto products.