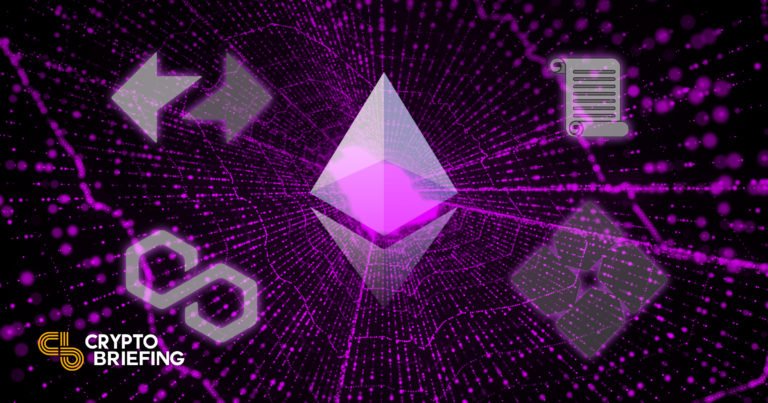 zkSync, StarkNet, Polygon zkEVM, and Scroll are some of the top ZK-Rollup projects building with EVM-compatibility in mind.
Each project is tackling the questions of throughput, cryptographic proofs, and levels of EVM-compatibility in its own way.
ZK-Rollups are expected to become one of Ethereum’s most important scaling weapons over the years ahead.

As Ethereum sets its sights on mass adoption, ZK-Rollup technology has emerged as a strong contender for scaling the blockchain, lowering transaction costs, and improving throughput. Crypto Briefing breaks down four major ZK-Rollups compatible with the Ethereum Virtual Machine that are currently under development, each of which promises various advantages within the Ethereum ecosystem.

Perhaps the single biggest barrier to widespread Ethereum adoption is the high cost of using the network, which has become an existential issue for the blockchain. The rise of DeFi protocols and NFTs has increased the demand for block space on Ethereum. Most transactions cost a few cents in 2019, but during the peak of the 2021 bull run, activities like minting NFTs on the blockchain would regularly come in at hundreds of dollars. As a result, many retail market participants found they were priced out of the network and turned to other networks like Solana, Avalanche, or Binance Smart Chain. Today, despite a downturn in network activity due to market conditions, simple transactions such as ETH transfers cost between $2 and $3, well above Ethereum creator Vitalik Buterin’s ideal goal of less than $0.05 per transaction.

Rollups offer a way to relieve congestion on the Ethereum blockchain. That’s because they outsource data off-chain, process it, and send transactions back to Ethereum rather than relying on the base chain to process each transaction’s computational data. With rollups, Ethereum only has to verify the proofs themselves and not the entirety of the data, which frees up block space. Rollups also allow transactions to be bundled together, which allows users to split gas fees.

Zero-Knowledge Rollups, also known as ZK-Rollups, use cryptographic proofs called ZK-SNARKS (“zero knowledge succinct arguments of knowledge”) to show to Ethereum mainnet that a transaction was processed. These zero-knowledge proofs can be verified quickly even though the underlying data would take a long time to analyze.

Some ZK-Rollup projects currently under development have announced their intention to be compatible with the Ethereum Virtual Machine, offering Ethereum developers a way to import their smart contracts to the rollup without modifying them. But as Buterin explained in a recent blog post, not all zkEVM projects are structured the same way: some optimize for complete EVM composability, and others for rapid throughput.

Developed by Matter Labs, zkSync is one of the most anticipated zkEVM projects. Boasting 2,000 transactions per second, a 10-minute processing time between the rollup and Ethereum mainnet, and no upper bound limit to the value the rollup can securely handle, zkSync is a leading project in the field of zkEVMs.

Despite its marketing, zkSync isn’t technically compatible with the EVM, but rather with Solidity and Vyper, two coding languages used on Ethereum. The difference, while small for users, is important for developers: among other things, contract addresses may differ, handwritten EVM code may not be supported, and debugging infrastructure may not necessarily be carried over.

The rollup is currently live on Ethereum’s testnet. The mainnet launch is expected to happen in three steps: “Baby Alpha” in November, during which the system will be put through real-money stress tests with no external projects involved; the Fair Launch, which will welcome all Ethereum ecosystem projects but keep user access limited; and the Full Alpha, expected before the year’s end. A zkSync token is expected, though details have not yet been announced.

StarkWare’s StarkNet is another major contender in the zkEVM arena. While StarkNet uses Cairo as its native coding language, a team is developing a coding translator called Cairo transpiler, meaning that, just like zkSync, the rollup will eventually be Solidity-compatible rather than EVM-compatible.

A permissioned version of StarkNet went live on Ethereum mainnet in February 2022. The StarkWare team also announced recently that StarkNet will have its own governance and utility token. While there are no official figures on StarkNet’s anticipated throughput at full capacity, StarkWare says the rollup could reduce gas fees on Ethereum by a factor of 100 to 200.

Polygon is an Ethereum scaling solution with a flexible framework that allows developers to build and connect Layer 2 infrastructure such as Optimistic Rollups and ZK-Rollups to the Ethereum network. In August 2021, Polygon acquired the ZK-Rollup project Hermez Network for $250 million; the firm announced a year later that it was working on its own ZK-Rollup, Polygon Hermez, which would work alongside its Proof-of-Stake Matic chain. Last month, Polygon announced that Polygon Hermez had rebranded to Polygon zkEVM and would head to mainnet in early 2023.

Polygon claims that its zkEVM will be able to handle up to 2,000 transactions per second and reduce transaction costs by 90%. The project’s code has been made open-source; a public testnet is expected soon.

Contrary to zkSync or StarkNet, Polygon’s ZK-Rollup does not intend to limit itself by being compatible solely with Ethereum coding languages, but with the EVM itself. Polygon zkEVM replicates the EVM rather than mirroring it. This implies that builders may still need to adapt code and tooling frameworks to the rollup, though to a lesser extent than on zkSync and StarkNet.

The ZK-Rollup aiming for the best integration with the EVM is Scroll. A relatively new project, Scroll can be considered truly EVM-equivalent; the only meaningful difference between the two is the runtime environment, meaning the subsystem in which contracts are executed. However, the high composability comes at the price of a significant computational overhead, which indicates Scroll’s performance could be weaker than that of zkSync, StarkNet, and Polygon.

The Scroll team has yet to release details about the project, but on July 18, it called on developers to register to try the Scroll testnet, which is expected in Q3 2022. The Scroll team is developing the project in collaboration with the Ethereum Foundation. The website claims that security, transparency, and EVM-equivalence are its top priorities.

Other groups researching ZK-Rollups include the Ethereum Foundation’s Privacy and Scaling Explorations team and an as-of-yet unnamed initiative affiliated with ConsenSys. Though research may contribute to existing projects and not necessarily lead to new ones, the recent breakthroughs in zero-knowledge proof technology may give rise to multiple ZK-Rollups in the Ethereum ecosystem. Though the Ethereum network still has a long road ahead when it comes to scaling, the rise of new zkEVM projects should benefit developers and users alike as they are presented with more solutions catering to different use cases.