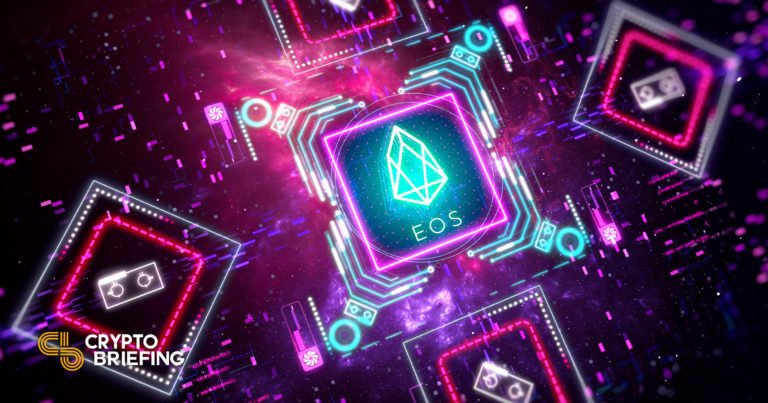 A new tweet from the EOS Foundation implies the project’s long-await rebrand will take place later today.
In respose, the EOS token has rallied more than 24% over the past 24 hours.
The community-led protocol Antelope is due to hardfork the EOSIO codebase on September 21.

The EOS Foundation also plans to hardfork the EOS blockchain on September 21.

The EOS blockchain is rebranding.

An early Wednesday tweet from the EOS Network Foundation has revealed that its long-awaited EOS rebrand is imminent. “Who is ready for the EOSIO rebrand? 15.5 hours… Tick Tock,” read a Wednesday tweet, implying that the foundation’s rebrand would go live today at around 16:00 UTC.

The foundation’s CEO Yves La Rose hinted that the EOS rebrand would launch “this week” on August 15, but it was only after EOS Network Foundation’s tweet that the market entered an EOS buying frenzy. EOS has jumped over 24% since it was posted, making it one of the best-performing crypto tokens of the past 24 hours, according to CoinGecko.

EOS famously raised a record-breaking $4 billion through its initial coin offering in 2017 but faced criticism after failing to live up to its promises. The EOS token has also underperformed those of other Layer 1 blockchains and has never broken its 2018 all-time high price. Although EOS has attracted prominent backers such as PayPal co-founder Peter Thiel, an internal struggle between the blockchain’s developer Block.one and the non-profit EOS Foundation has weighed on the project.

Under La Rose’s leadership, the EOS Foundation has worked to sever ties with Block.one. In February, La Rose announced the Foundation would seek legal recourse against Block.one for what it called “negligence and fraud” following the EOS ICO. The EOS community also voted to stop issuing vested EOS tokens to Block.one in late 2021, claiming that the company had failed to deliver on its promises for EOS.

Now, the EOS Foundation is gearing up to completely cut ties with Block.one, entering what La Rose has called a “new chapter” in the blockchain’s development. The foundation will rebrand EOS under a new name to distance itself from the period of lacklustre development that it blames on Block.one. Additionally, the EOS Foundation plans to hardfork the blockchain’s existing EOSIO codebase on September 21, a necessary step to transfer project ownership away from Block.one and its affiliated companies. “This marks the end of a turbulent journey from a codebase controlled by a toxic entity to a truly decentralized and open source project,” said La Rose in a Monday tweet storm explaining the rebrand and hardfork.

Onlookers will have to wait until later this afternoon to see what kind of brand and image EOS will transition to. However, with other upcoming Layer 1 blockchains such as Aptos gaining the market’s attention in recent weeks, EOS will have its work cut out if it wants to make an impact. Compared to when EOS launched in 2017, the Layer 1 blockchain space of 2022 has become significantly more saturated.

Update: The EOS Network Foundation announced Wednesday that the community-led protocol Antelope will fork and rebrand the EOSIO codebase. The hardfork is slated for September 21.

Disclosure: At the time of writing this piece, the author owned ETH and several other cryptocurrencies.