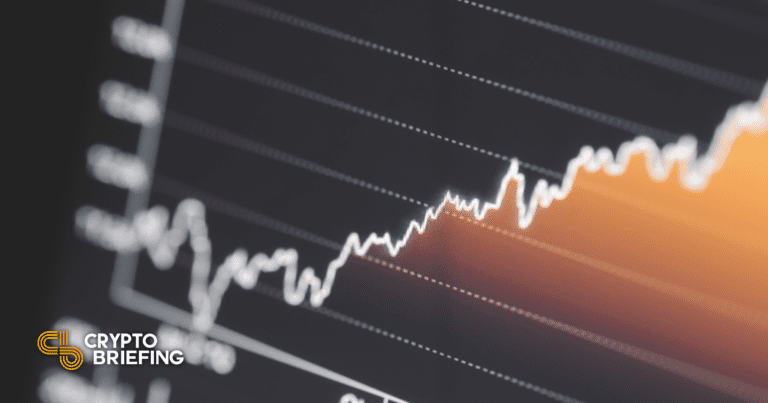 A month of narrow trading ranges has some commentators wondering if the bottom is in.
Looking at recent price action doesn’t tell the whole story, however.
Comparing the relative trading volumes between the 2018 drawdown and today gives a more comprehensive picture.

An unreactive crypto market may signal that prices have found a floor.

After months of downward volatility, the crypto market appears to be stagnating.

Over the past month, the prices of many major crypto assets have remained trapped in an increasingly narrow range. Since September 15, Bitcoin has fluctuated within a tight $2,350 range that appears to be narrowing over time. Ethereum, the second-largest cryptocurrency, has shown a similar drop in volatility, bouncing between the $1,400 and $1,200 levels over the past month.

According to the Crypto Volatility Index (CVI), price movements are at their most subdued since May 7, shortly before the Terra blockchain’s UST stablecoin lost its dollar peg and entered a death spiral, sending shockwaves across the entire market. The CVI currently shows a reading of 65.99, not far off the metric’s all-time low of 50.41, which was set on March 31, 2019.

The effect is so pronounced that Bitcoin has become less volatile than some traditional equities indices. For example, over the past month, Bitcoin has traded within a 9.4% range, as opposed to a range of 10.35% for the NASDAQ100. Additionally, equity volatility, as measured by the S&P Volatility Index, recently registered a new all-time high against Bitmex’s Bitcoin Historical Volatility Index, highlighting the magnitude of the top crypto asset’s drop in volatility.

There are several reasons crypto volatility has plummeted. The most prominent factor is the crypto markets’ lack of trading volume. According to data from Blockchain.com, the total USD trading volume on major Bitcoin exchanges has hit a 30-day average low of $143.5 million, the lowest level since November 2020. When there is less buying and selling of Bitcoin, it often results in more subdued price movements.

However, broader macroeconomic factors are likely also playing a part in Bitcoin’s relative price stability. Uncertainty in global markets has continued to weigh on traditional equities. The Federal Reserve’s monetary tightening policy aimed at reducing inflation has many market participants worried about the long-term damage such actions could have on the financial system. U.S. Treasury bond yields have soared in recent weeks, signaling a lack of confidence in the government’s ability to pay off its debts.

Since Bitcoin and other cryptocurrencies are not directly connected to the traditional financial system, they may have escaped some of the problems plaguing other financial assets such as stocks and bonds. Additionally, since the June crypto crash forced many large holders to exit the market, those still holding crypto likely have no inclination to sell anytime soon. While these factors explain the lack of sellers, they may also impact potential buyers. The gloomy macroeconomic outlook will have those looking to buy back their positions waiting patiently for a sign the worst has passed.

Is the Bitcoin Bottom In?

The recent lack of volatility has prompted many to ask whether Bitcoin has found a floor around its current price.

One way to help judge if Bitcoin has bottomed is by comparing the current state of the market to that of the 2018 crypto winter. In 2018, Bitcoin’s price fell sharply throughout the year’s first half, plummeting from a high of $17,176 on January 5 to a low of $5,768 on June 24. For the next four and a half months, Bitcoin price traded sideways, attempting to break out to the upside but unable to drop below its June low. However, when the low was eventually challenged and broken in mid-November, it resulted in a capitulation event that took the top crypto down to its cycle low of $3,161.

A Surprisingly similar situation is currently playing out in 2022. Bitcoin hit a local low of $17,636 on June 18 and has been unable to pass below it, despite several attempts. All else aside, a direct price comparison between the 2018 bear market and the present one would suggest that, like in 2018, another final leg down has yet to happen.

However, just comparing price action doesn’t tell the whole story. Taking into account the relative trading volumes between the 2018 drawdown and today gives a more comprehensive picture. Compared to 2018, Bitcoin trading volumes across major exchanges are already far lower than at the same point in 2018. It could be that the forced selling induced by the collapse of the Terra ecosystem and the Three Arrows Capital bankruptcy in June has sped up capitulation and helped the market to bottom sooner than it did in 2018.

As I’ve mentioned in a previous article assessing a potential market bottom, several technical indicators absent at a comparable point in the 2018 bear market have also flashed signals. Net Unrealized Profit/Loss (NUPL), the Pi Cycle Bottom, and the Puell Multiple have all already hit once-in-a-cycle levels that have historically marked a bottom. It’s worth noting that these metrics have so far proved correct for the current cycle, as the market has been unable to break its June low. It’s possible that the longer the market stays above its June low, the more confident investors will be that the bottom is in. This could encourage buyers and result in a partial market recovery similar to what happened in 2019.

Still, for this scenario to have any chance of playing out, Bitcoin would need to remain strong throughout November. While bulls will argue there’s a chance of a rally leading up to the U.S. midterm elections, bears still appear to be in control due to soaring inflation and the poor global macroeconomic outlook. All things said, not much has changed since we last looked at the possibility of a market bottom in July. But judging by the current lack of volatility, I expect we’ll find out whether or not a final leg down is in store for the current crypto winter sooner rather than later.

Disclosure: At the time of writing this piece, the author owned ETH, BTC, and several other cryptocurrencies.