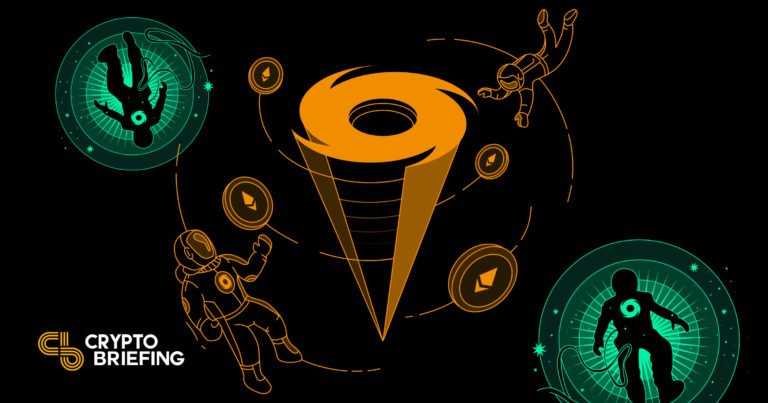 Tornado Cash has begun blocking sanctioned users from accessing its application.
The update follows Chainalysis’ update that it had flagged an Ethereum address connected to the Ronin Network hack in its products.
The crypto community has decried Tornado Cash’s decision to comply with regulations.

The sanctioned addresses will not be able to interact with Tornado Cash’s frontend, but that doesn’t stop them from interacting with the smart contract.

Tornado Cash uses @chainalysis oracle contract to block OFAC sanctioned addresses from accessing the dapp.
Maintaining financial privacy is essential to preserving our freedom, however, it should not come at the cost of non-compliance.https://t.co/tzZe7bVjZt

The team behind the Ethereum protocol, which is popularly used as a mixer to preserve transactional privacy, posted a tweet Friday confirming that it was leveraging an oracle contract from the security analytics firm Chainalysis to block Ethereum addresses that had been sanctioned by the Office of Foreign Assets Control. “Maintaining financial privacy is essential to preserving our freedom, however, it should not come at the cost of non-compliance,” Tornado Cash wrote. The announcement included an Etherscan link to the Chainalysis contract, showing that three addresses had been added to the list since Mar. 10.

It comes a day after it emerged that North Korea’s Lazarus Group was behind the $550 million Ronin Network attack that happened on Mar. 23. The Treasury Department posted an update indicating that it had added the Ethereum address 0x098B716B8Aaf21512996dC57EB0615e2383E2f96 to its sanctions list. Chainalysis then posted a tweet storm confirming that it had flagged the address in its products.

Tornado Cash is useful for obfuscating transaction history on Ethereum as it lets users deposit assets to a contract and then withdraw them from a separate address, which makes it more difficult to track their on-chain footsteps. It supports ETH and other Ethereum-compatible assets. Due to its utility in preserving anonymity, it’s a popular tool among DeFi hackers looking to launder their funds. Tornado Cash has historically prided itself on its permissionless, censorship-resistant nature, but its latest move to comply with regulators has sparked criticism as it goes against true decentralization. Multiple prominent crypto users responded to Tornado Cash’s post to criticize the team on its decision. “We need a new mixer. Who’s gonna build it?” said the pseudonymous Twitter user basedkarbon. It’s important to note, however, that while the oracle can block addresses from using the Tornado Cash app, it does not stop them from interacting directly with the smart contract.

Tornado Cash is not the first app of its kind to bow down to regulatory pressure. In another move that was met with outrage by the crypto community, the Bitcoin mixer Wasabi said in March that it would start blocking certain transactions to its CoinJoin mixing protocol. The update came after Chainalysis revealed that it had cracked Wasabi’s CoinJoin implementation to uncover the identity behind The DAO hacker that almost killed Ethereum in 2016, raising questions about whether crypto mixing services are truly capable of providing anonymity. Tornado Cash’s update has led to further alarm bells, only now crypto purists are asking whether Ethereum’s top mixer is truly censorship resistant.

OVR is the decentralized infrastructure for the metaverse, merging physical and virtual world through Augmented Reality, creating a new dimension where everything is possible. It’s composed of 1.6 trillion unique hexagons…

Tornado Cash is a decentralized, non-custodial privacy solution for Ethereum and other smart contract-enabled blockchains based on ZK-SNARK technology. It lets users break the links in their on-chain activity to…

0xSifu, the recently-ousted treasury manager of the decentralized finance protocol Wonderland Money, has sent millions of dollars’ worth of Ethereum to Tornado.Cash, a platform that allows users to obscure the…

Wasabi, a Bitcoin-only wallet with one of the most popular transaction mixing implementations, has announced that it will start censoring certain transactions to its CoinJoin mixer. Wasabi’s CoinJoin to Start…