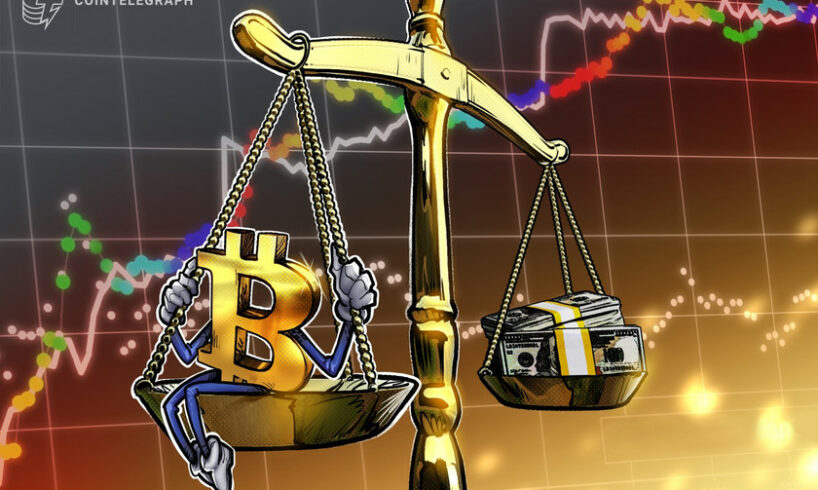 Bitcoin (BTC) stayed wedged in a tight range on June 4 as traders’ demands for a new macro low persisted.

Data from Cointelegraph Markets Pro and TradingView showed BTC/USD stuck between $29,000 and $30,000 into the weekend.

The pair had managed a revival to near $31,000 the previous day, but the last Wall Street trading session of the week put pay to bulls’ efforts.

As “out-of-hours” markets offered thin volumes but little volatility, eyes were on the potential direction of what would be an inevitable breakout.

“The weekly chart on Bitcoin looks nothing short of horrific and so the trend continuation remains. I do think we consolidate a little longer in this range before dropping eventually,” Crypto Tony announced on the day in part of a series of tweets.

A further post reiterated a target of between $22,000 and $24,000 for Bitcoin once that forecast drop took hold.

“I am looking for another drop down to $24000 – $22000, but of course distribution takes time. So we may be hovering around this support zones before any drops just yet,” it read.

Others planned to make the most of incoming weakness, including popular Twitter account Cryptotoad, which announced a strategy of accumulating at $27,000 and under in what would be a “swing low” for BTC/USD.

I don’t know what you’re gonna do, but My plan is to start accumulating my long term position at 27k swing low all the way down to the 0.382 fib at 21.5k.

Adding fuel to the fire was data from on-chain analytics platform CryptoQuant, which signaled that long-term holders were starting to divest themselves of their stash in a classic bear market move.

Commenting on a chart of long-term holders’ Spent Output Profit Ratio (SOPR), Edris drew comparisons to conditions that preceded generational bottoms in Bitcoin’s history. These included the 2014 and 2018 bear markets, as well as the COVID-19 cross-market crash of March 2020.

“Currently, the long-term holders are entering the capitulation phase and are selling at a loss, indicating that the smart money accumulation phase has begun, and the next few months would present a great opportunity for long-term investing in the market,” the post read.

It noted that such a capitulation event “usually marks a multi-year bottom.”

In a hint that some were already buying the dip, meanwhile, exchange data showed that outflows were beating inflows markedly in recent days.

Related: Over 200K BTC now stored in Bitcoin ETFs and other institutional products

According to on-chain analytics firm Glassnode, on June 3, netflows from major exchanges totaled -23,286 BTC, the most since May 14.

Specifcally, those who bought near the November 2021 all-time highs “appear to be relatively price insensitive,” he wrote, adding that the investor profile was increasingly composed of such stubborn hodlers.

“Despite continued drawdowns in price, and a major spot liquidation event of 80k+ BTC, they remain unwilling to let their coins go,” he added.