What Is STEPN and Why Is GMT Going Parabolic? – WORLD CRYPTO BUSINESS
You are here: Home Market News 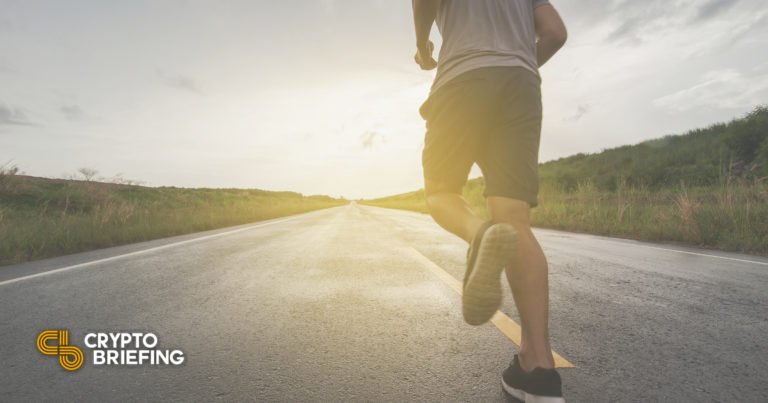 STEPN’s GMT governance token has soared in value over the past week, climbing 138%.
The app lets users earn tokens by walking, jogging, or running outdoors, similar to Axie Infinity’s play-to-earn model.
Widespread speculation of a partnership with a major sportswear brand has fueled the recent GMT token rally.

STEPN touts itself as a Web3 lifestyle app with inbuilt Game-Fi and Social-Fi elements. The app lets users earn tokens by walking, jogging, or running outdoors and hopes to nudge players toward a healthier lifestyle.

STEPN, a “Web3 lifestyle app” that lets users earn tokens by walking, jogging, or running outdoors, has seen its GMT governance token soar in value over the past week, climbing 138%.

Although STEPN is still in public beta, it has already amassed over 100,000 downloads on the Google Play store and over 139,000 followers on Twitter. The game currently runs on Solana but says it plans to expand its decentralized wallet to offer multi-chain asset deposits and withdrawals in the future.

To start earning tokens, players need to buy or rent a pair of sneakers from the in-app marketplace using Solana’s native asset, SOL. When starting out, players can only earn the unlimited supply GST token. However, as players level up their sneakers by moving, they can start to earn the limited supply GMT governance token, provided they own their sneakers and are not renting them.

STEPN’s tokenomics model is similar to that of the play-to-earn game Axie Infinity. In STEPN, GMT plays a similar role to AXS; it has a finite supply and is required to level up and mint new pairs of sneakers. GST is more like Axie’s SLP; it has an unlimited supply, it can be used to repair sneakers after use, and it also gets consumed when sneakers are leveled up or minted.

However, STEPN deviates from Axie’s model by providing more use cases for the earnable GST token. In Axie Infinity, the SLP token was initially only consumed by breeding new Axies. As more people started playing the game to profit from the SLP rewards, supply outstripped demand, and the token’s price crashed. STEPN tries to address this issue by making its sneakers degradable. That’s why players need GST to repair them and continue playing.

As STEPN’s public beta only opened in December, its pioneering token model is still relatively unproven. However, this hasn’t stopped several top venture capital firms from making sizeable investments in STEPN. The app raised $5 million by selling over 16% of its token supply in January. Sequoia Capital India and Folius Ventures co-led the raise, and the likes of Solana Ventures and Alameda Research also participated.

Why Has STEPN’s Token Soared?

While STEPN has steadily gained traction since its beta launch, several additional factors are likely fueling the recent surge. In a recent interview with Solar Eco Fund, a STEPN spokesperson hinted at a possible partnership with a major sports brand. When asked if STEPN saw companies like Nike and Adidas as future competitors, the spokesperson dropped an unsubtle hint about the project’s plans. “You will see we have an announcement about this very soon,” they said.

Speculation about STEPN’s upcoming partnership has been widespread across social media, with many users looking for clues in recent Twitter posts. In a Mar. 29 tweet commenting on the recent Ronin Network hack, STEPN shared a piece of artwork containing several hidden brand logos.

Can you see the brand logos? (Source: @Stepnofficial)

The trademarks for sportswear companies like Head, Nike, Adidas, and Asics are visible in the artwork alongside what appears to be a Binance logo. Since STEPN used Binance’s token launchpad to sell 7% of its GMT token supply at the beginning of March, some speculate that a more substantial partnership with Binance is also on the horizon.

Excitement for STEPN’s partnership announcement is palpable, but whether its recent price surge is sustainable is not yet clear. While some onlookers are already calling STEPN the “next Axie Infinity,” others are skeptical due to the large number of GMT tokens sold to institutional investors during its seed round. Future token unlocks for early buyers could also cause problems for those buying GMT tokens at current prices.

Disclosure: At the time of writing this piece, the author owned SOL and several other cryptocurrencies.

The Ronin bridge and Katana exchange have been halted following the incident.  Axie Infinity Network Suffers Vulnerability Ronin Network, the blockchain underpinning the popular play-to-earn game Axie Infinity, has been…

Solana has reached a crucial resistance level as it attempts to catch up with other Layer 1 coins like Avalanche, which have surged by more than 35% in the past…