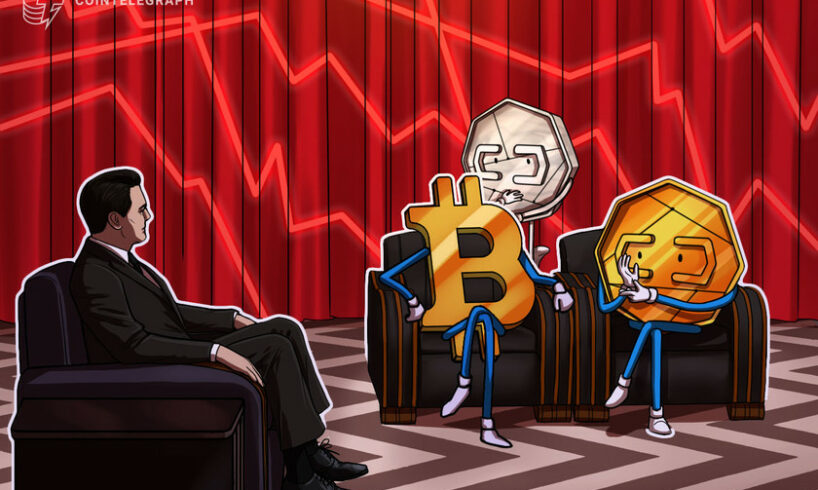 On Aug. 15, Bitcoin (BTC) price and the wider market corrected while the S&P 500 and DOW looked to build on four-straight weeks of robust gains. Data from TradingView and CNBC show the Dow pushing through its 200-day moving average, a first since April 21 and perhaps a sign for bulls that the market has bottomed.

While equities markets have been strikingly bullish in the face of high inflation and a steady schedule of interest rate hikes, a number of traders fear that the current 32-day uptrend in the DOW and S&P 500 could be a bear market rally.

This week’s (Aug. 17) release of minutes from the Federal Open Markets Committee (FOMC) should give more context to the Federal Reserve’s current view of the health of the United States economy and perhaps shed light on the size of the next interest rate hike.

For the past month, overly bullish crypto traders on Twitter have also been touting a narrative that emphasizes Bitcoin, Ether (ETH) and altcoins selling off prior to FOMC meetings and then rallying afterward if the set rate aligns with investors’ projected figure.

Somehow, this short-term dynamic also contributes to investors’ belief that the Fed will “pivot” away from its monetary policy of interest hikes and quantitative tightening after “inflation peaks.” This may be a somewhat profitable trade for savvy day-traders, but it’s important to note that inflation is currently at 8.5% and the Fed’s target is 2%, which is quite aways to go.

Ultimately, Bitcoin price maintains a high correlation to the S&P 500 so investors would be wise to avoid tunnel vision-like narratives that align with their bias and keep an eye on the performance of equities markets.

Over the weekend Bitcoin made a strong move at a multi-month descending trendline and broke through the $24,000 level, following a path that many traders anticipated would trigger an upside move and VPVR gap fill to the $28,000 to $29,000 level.

$BTC really looked like it was going to go last night – and now we have 2x outside brewing pic.twitter.com/gkyLodiXi6

Trader Cheds said “BTC really looked like it was going to go last night” but the selling at resistance created an “outside bar” where “the prior trend was challenged” and according to Cheds, this is a sign that “the trend may be stalling and be on the look out for signs of further weakening.”

Bitcoin’s Bollinger Bands are also constricted, a sign that a directional move is imminent but we’ve already seen expansion into the top band at the $25.6K trendline resistance. Is a $22.4K retest next before $BTC attempts to grind higher? Few have mentioned the falling wedge… pic.twitter.com/wi1VpGt2y7

Pseudonymous trader “Big Smokey” appeared to concur that “strong directional move” could be on the cards, citing tightening in the Bollinger Bands and separately in the Super Guppy indicators as Bitcoin price drew close to the multi-month descending trendline.

There are some signs that a strong directional move is on the cards for Bitcoin: Super Guppy is getting real tight, possibly provoking a 26% pop to $28K before more sideways chop or downside to grab what will be new liquidity at the $24K s/r re-test by then… pic.twitter.com/1VgAkjj10o

In a separate chart, Big Smokey suggested that if the descending trendline is broken, Bitcoin could see “a 26% pop to $28K before more sideways chop” resulting in an eventual retest of the $24,000 level.

After hitting similar overhead resistance levels, most altcoins also followed Bitcoin’s lead by posting single-digit losses, but those that were flashing bottoming signals are still rounding out with what appear to be reversal patterns.

Every dog has its day

Interestingly, on Sunday (Aug. 14) popular traders on crypto Twitter prophesied that the sharp gains from meme tokens like Shiba Inu (SHIB) and Dogecoin (DOGE) were a clear sign that the bull phase was over-extended and en-route to a correction.

Pulled this from the archives.

Time is a flat circle. pic.twitter.com/QplWWT43R5

Ultimately, after a 130% and 42.5% rally from Ether and BTC, each was poised for a bit of profit taking, especially at resistance. Open Interest on both assets remains near all-time highs, but what it will take to trigger BTC to breakout or breakdown at the multi-month descending trendline is unknown.

Perhaps a 1% rate hike, stiffer crypto regulations or a surprise turn-around in equities markets could send price tumbling back toward yearly lows. Alternatively, a successful Ethereum Merge could be a positive catalyst that triggers a high volume surge above Bitcoin’s key resistance level.